WM Plumbing Septic Tank & Grease Trap, your trusted solution for all plumbing needs in Miami. With years of experience in providing high-quality plumbing services for both residential and commercial properties, our team of highly skilled and experienced plumbers is committed to delivering efficient and cost-effective solutions.

At WM Plumbing, we understand the importance of finding a reliable and trustworthy plumber. That’s why we offer transparent and honest services, ensuring that our clients receive the best possible outcome. Our team takes the time to listen to your needs and provide customized solutions tailored to meet your specific requirements.

In addition to plumbing services, we also specialize in construction management, providing a complete end-to-end solution for your project. From consultation to completion, our team works closely with clients to ensure that every aspect of the project is executed to the highest standard. Contact us today to schedule an appointment and let us take care of all your plumbing needs.

Principles of Our Work

Dedicated to providing a unique experience for every customer, Mr. Fraga has dedicated himself extensively to the field and has enhanced the companies operations thru the years. With a Bachelor’s Degree in Business Management from Florida International University Mr. Fraga is uniquely qualified to handle the most specific and demanding projects. If your kitchen is hopelessly out of date or ill-suited to your needs, turning it into a more functional space can be a laborious, and often expensive, endeavor. On the other hand, if your kitchen works well for you, but you want to make some kind of improvement, there are many reasonably priced, quick, and …

Albert Einstein was made an honorary member of the Plumbers and Steamfitters Union after he had announced that he would be a plumber if he had to live his life all over again.

In the technology capitol of the world, Japan, some urinals have voice activated flushing mechanisms. The urinals respond to several commands, including “fire.”

Over $100,000 were spent on a study to determine whether most people put their toilet paper on the holder with the flap in front or behind.
The answer: Three out of four people have the flap in the front. 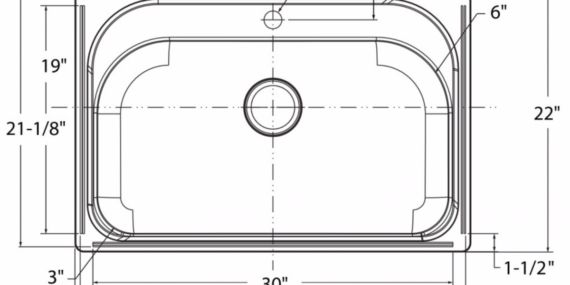 The Importance of Materials and Kitchen Sinks

It would be irrational for anyone to overlook quality when it comes to buying kitchen sinks. Undeniably, a kitchen sink is not only an essential but a constantly in use component of any kitchen. There was a time when stainless steel, as a newly introduced material, was considered special for kitchen sinks, regardless of the …